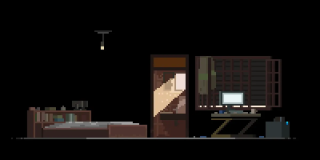 CRAFTING INTERACTIVE SOFTWARE, ACROSS ALL HARDWARE, WITH GREAT CARE.

Original IPs as well as contract work for a very select club of close partners since 2012.

Solely founded and operated by Khalil Arafan, a 20+ years programmer by trade.

As of 2019, things are off to an extremely exciting start for our Debut Desktop Gaming Endeavor ! VERY happy to announce that we joined forces with :

House Specialties Meditations Tinder-Like App Morocco Cards Mobile MOBA Game Tools Fulltime Game Programmer Medical Desktop App Prince of Persia : Forgotten Sands Fahrenheit : Indigo Prophecy
For a complete list of our apps please refer to the home page. Of note : some works were removed from some stores recently due to changes in recent Ads SDKs, the oldest apps are under maintenance, we still didn't get around to update them. We might at some point. Or we might not, as we are moving onwards with Desktop projects only in the foreseeable future. The list of projects is also far from exhaustive. This section highlights the most notable ones and/or mostly client work not disclosed elsewhere. if you feel like getting to know us better, there is plenty (long) reads linked in the MISC section. Or if you'de rather have a quick glance at what kind of technologies we work with, give us 50 gold coins and take a look :
Our latest freelancing work during late 2018 was a stellar collaboration with non other than the great Rami Ismail from Dutch independent games studio : Vlambeer ! We are very proud and grateful for the unique opportunity that it was to make an alternative launcher application for the Meditations project as a support engineer. Made in C#, using unity3D & the open source zip library : SharpZipLib to great results for Windows & MacosX systems. Contacting server through www web calls from Unity3D C# scripts, decrypting password protected files, decompressing then executing the correct version of the daily game depending on the user system.
A major contract project was underway for a good part of the first half of 2018. A Tinder-Like App for the medical staff industry in French speaking European territories. We started the systems archiecture and foundational work for it using Unity3D and Gamesparks until it sadly fell through due to major specs changes and other disagreements in the team. Learning some new tech was great though : namely progressive web apps during final phase of collaboration when it was still on the table to switch from Mobile only to also include a Web app. After that we kept busy prototyping a proof of concept for another client : a video chat app based on webRTC technology. We delivered a chat roulette like website by summer end after two months on that task, using Bootstrap, socket.io, node.js setup hosted at Zeit and webRTC protocols, working from Desktop and Mobile.

Our latest solo project was as much a personal challenge for constant learning purposes as it was really valuable on the R&D front : after investigating many technologies a one man shop can leverage to one's advantage for fast and reliable production cycles, the decision was made to use Gamesparks great platform for this project. The result is a multiplayer turn based card game available on iOS and Android devices. It took a lot of time and determination, it was remade 2 times from scratch. Long story (2 years) short :

• Playable solo against bots hosted server side or human players from around the world.

• 2, 3 or 4 players matches. Leaderboards : by game type and global scores.

• Find opponents by joining their challenges or create your own.

• Database and javascript code used on the backend. Client side handled with Unity3D in C# & Gamesparks SDK to interface with their API.

By end 2016, I had a blast collaborating with a remote stellar team of 8 indies between Morocco and the US, making an RTS/MOBA title for Mobile devices, using deterministic Networking among many other bleeding-edge features. It was my first real experience making editor tools for a Unity3D project, and all kinds of fun were had with scriptable objects, reorderable lists and character classes definitions. Agile methodology, Slack and Atlassian suite of software used on team work tools side of things for about 3 months.
2015 was pretty much occupied by being a fulltime videogame programmer at a French Startup outsourcing some of its engineering work to Casablanca. 8 months total : 6 of which were dedicated to a core gameplay mechanic of a casual match 3 game on Mobile and WebGL. Other tasks included third party integrations for social play, namely Facebook API to wrap in our own API for multiple games use with Unity3D SDK. The last two months were spent with the other team project collaborating with the webdev colleagues : proof of concept of a google maps display inside a webview in a Unity3D app. Google Maps API requests were constructed with a simple php routing script intercepted from the C# app using this tool. That same year on week-ends and evenings some Indie activity was still underway. It was a pleasure and a privilege to make a companion Mobile app for the amazing friend and musician Khalil Mounji Associative project : Gnaoua Culture. I also took another job after that, part-time since I missed being able to work on my own projects. 3 Months total : Android card game port to iOS and 3rd party features integration.
Back in 2012, we survived the first year thanks to one local client gig before releasing the first official app under our brand name. A desktop app made in C# (pure .NET, everything was made custom before using Unity3D) for a pharma lab launching a new med. The app computed risk chances to help doctors assess the risk of the medicine. We were given a specific chart and factors to input according to their formula and assess risks by medicine type similar to this.